Why are the Liberal Democrats So Bad at Talking about Inequality?

In this article, Nick Brown argues that despite radical and progressive redistributive policy, the Liberal Democrats’ public image on the issue of inequality is lacking. He proposes a bolder approach, to highlight our major differences from the regressive plans put forward by Labour and the Conservatives.

The current political landscape is volatile and offers a huge opportunity for new forces to take control of our broken system. The old, failed, regressive parties are finally on the brink of getting their just deserts and it is no longer outlandish to suggest that a good approach from our party could go some way to permanently dislodging their permanence at the apex of British politics. But in order to do so, we must tackle issues that have historically plagued us, and one of these is inequality. Despite our radical and progressive policy, we have failed to match up to Labour in the public sphere – even journalists such as Andrew Marr are so unaware as to ask on the 2nd June whether we are still nothing more than the “pro-remain wing of the Conservative party” – and so need an updated approach to consolidate recent success.

At the recent leadership hustings in Bath, a question was asked about the candidates’ views on taxation and how Liberal Democrats should tackle inequality. Both Ed and Jo provided admirable responses, particularly Ed’s endorsement of the old Liberal favourite Land Value Tax and Jo’s discussion of innovative ideas including a tech tax or a carbon tax. But neither came out with a strong emotional message about creating real opportunity by destroying the wealth and income gaps that hold so many people in Britain back. In the context of a potential General Election, we must be ready for the risk that inequality and the economy become as salient as they were in 2017, displacing Brexit and climate change in public discourse – issues on which we are currently succeeding.

So why is it that we are so bad at talking about this issue? Is it because we simply do not have the policies to tackle it? A small amount of research is enough to prove that this is not true. An IFS analysis of tax and welfare policies in the major parties’ 2017 manifestos found that Liberal Democrat policy was more redistributive than Labour, who found themselves hardly better than the Tories apart from large new taxes on the rich (see chart below). 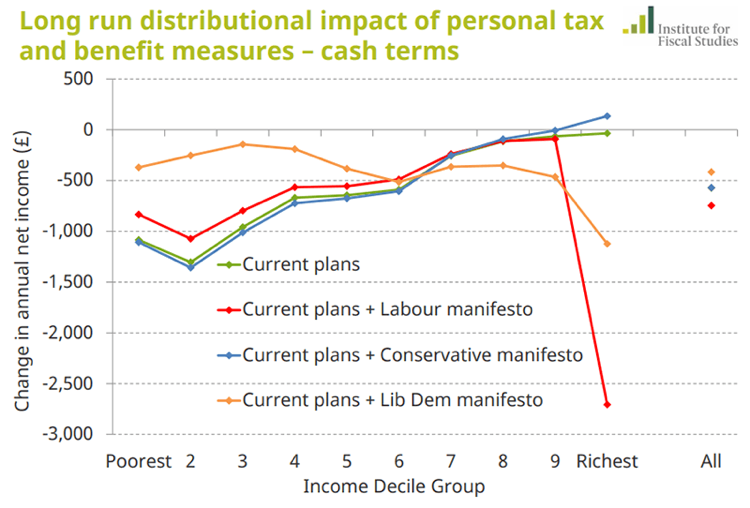 More recently, the successful Autumn 2018 conference motion “Promoting a Fairer Distribution of Wealth” ensured that the Liberal Democrats now support a number of progressive reforms including taxing capital gains at income tax levels, reforming inheritance tax, and abolishing Council tax to create a fairer property tax. These policies demonstrate a clear commitment to rebalancing wealth in a time of high inequality, in keeping with our party’s constitutional commitment to ensuring nobody is enslaved by poverty. Why is it, then, that public awareness of Lib Dem policy on this issue does not line up with reality? The answer, chiefly, is messaging. A quick Ctrl+F search of our 2017 manifesto finds no instances of “redistribution” and only 1 of economic “inequality”, whilst our leaders always seem to answer ambivalently on the issue in public, failing to conjure the passion that we currently reserve for fighting Brexit or climate change.

What, can therefore be done to improve our stock on this issue? The first thing we must do is cease to allow Labour a monopoly on fighting inequality. We must call out regressive populism in Labour policy – in 2017 some big-ticket items including free school meals for all primary school pupils and abolishing tuition fees were nothing more than expensive pay-outs for the middle class, completely failing to line up with the Labour narrative ‘for the many’.

Secondly, we must reform our approach. On policy, we can alter our radical plans to make them more universal and easier to communicate to the electorate – ideas of universal basic income or a negative income tax could come alongside proposals for a simpler overall wealth tax to replace our current tinkering with capital gains and property values. These should be joined with further cuts to regressive taxes like VAT. But more importantly, we must find a strong message that we can communicate in 8 words or less to overcome Corbyn’s powerful narrative ‘For the Many, Not the Few’.

The legacy of the last few years in British politics is that there are millions of voters crying out for a party that is anti-Brexit, internationalist, liberal on justice and civil rights issues but also progressive on the economy and willing to tackle inequality. We know that this party is us – but we must find a way of making everyone else know it too, or risk losing this opportunity to permanently fracture Britain’s failing two-party system.